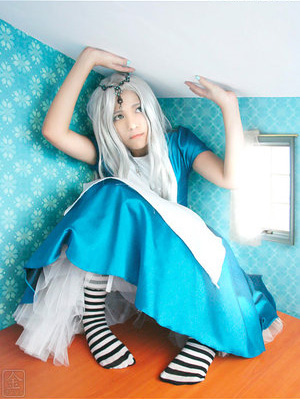 Once upon a time there was a young business entrepreneur named Alice who had heard all about the benefits of social media.

Her friend Mr R White was always busy updating his social status and had quite a crowd of followers all eager to talk to him. So, being curious, she decided to find out more and took the plunge into the bizarre world of social media networking.

She was confronted with many doors with names such as Facebook, LinkedIn, Foursquare, Google+ and Twitter. Some she had heard of and others, such as Elixio, Kiwibox and Pingsta she had not. She tried to get into one of the doors but she found that she just couldn’t fit in.

What was she to do? Which was the right social media platform for her and her business? She began to despair and cried big tears which turned into a sea and bore her away onto the banks of a forest.

Identifying Your Brand
Alice wanders around aimlessly until she bumps into Miss Kat Pillar. She asks her what’s wrong and she begins to tell her how she doesn’t fit into any of the social media doors. Miss Pillar thought about this: “Who are you?” she finally says. “I hardly know” Alice replies.

“That is the problem then” Miss Pillar remarked before crawling away. Alice thought about this – could she be right? After all, as a small business she didn’t really have a unique identity to speak of.

Moral meaning:
With multiple social media choices and different methodologies for each platform, the one thing that must remain consistent is your brand. It’s the essence of your business, the look and feel, your voice and mission. With consumers having more options than ever before, if you want to stand out, define what your brand stands for.

Needing Direction
As she wanders on she bumps into Professor Cheshire and decides to ask him which way she should go. He tells her that it all depends on where she wants to go. Alice remarks that she doesn’t much care where she goes but as the Professor points out, wandering aimlessly will make her mad. So Alice realises that not only does she need a brand but she needs a direction too – a way forward with which to drive her business.

Moral meaning:
Think about what you really hope to achieve from social media. Engaging business contacts? Mentoring? Building brand advocates? Or an incentive for new customers. Whoever you decide to target with social media make sure you have a clear sense of purpose.

Don’t dismay!
Alice stumbles upon Mr Hatter having a mad party behind the Twitter door with Marquis Hare and Dodo. They have formed quite a little clique and rudely ignore Alice as she tries to engage them in conversation.

Eventually she becomes very disheartened by their lack of response and so leaves to try one of the other doors.

Moral meaning:
It can be hard to interact with people and many businesses give up at the first hurdle, but remember that every brand had to start somewhere and you can’t expect to be popular straight away.

Have corporate guidelines
Then Alice sneaked through the Instagram door and saw a delicious cake with a sign saying “EAT ME” so she did without thinking. To her horror, lots of people complained at her wilfulness and she didn’t know what to do.

So she looked to the hearty Queen, an established social brand who has many followers hanging onto her every word. She even has a YouTube account where she shares her passion for croquet.  HRM tells Alice off and is very clear on the fact that there is a right way and a wrong way to go about social media conversation.

Moral meaning:
Guidelines are there for a reason. You have to stay impartial to current affairs and make sure all your colleagues are aware of the rules. Even large brands like Kellogg’s can fail on social media so keep it appropriate and inoffensive. Always think before you act.

Alice Learns from her Adventures in Social Media Land
As Alice reflected upon her adventures she realised that social media could help her company to develop and reach out to customers and business contacts, but that she needed to think carefully about how best to use it. It was no good having lots of different accounts, so she needed to focus on the social platforms which would best suit her, where her customers were most likely to be and devote her energies to these. She needed to be professional in her outlook, yet approachable at the same time. Patience was also important, she couldn’t expect to be a success overnight but must keep on updating and keep her updates relevant and interesting with incentives for people to share and like.

Armed with all this information, Alice felt confident and happy and with that she suddenly found herself back at her desk, knowing exactly what she was going to do next.